The PCs spend some time coming up with a plan for the assault on Arauthator’s lair, before deciding to scout out the chute leading down from the Scriptorium. Gwastdyn wild shapes into an arctic tern and flies down the tunnel but soon realises the cavern is dark and he cannot see. He returns to the upper level, changes into a snowy owl, and flies back down. When he emerges into the dragon’s lair, he dodges a net of magical force that has been launched at him through the icy mists. Deciding caution is the better part of valour, he rejoins the others.

Back in the Scriptorium, the druid rests to recover his wild shape ability, then summons four ice mephits. The PCs drink potions of cold resistance and walk down the chute, sure-footed with their crampons on. One nervous mephit is sent into the cave, while Ug and Turin approach the end of the chute and peer out. Suddenly a cloud of freezing fog engulfs them. Rosie secures a rope and the two warriors climb down as fast as they can, followed by Rosie and Crake. Ug misjudges where the icy ledge ends and falls off. As the adventurers move out of the fog, Arauthator casts fireball, catching them in its blast.

Gwastdyn and the mephits come down to join the others as the PCs scatter to avoid bunching up in a group. Arauthator appears, terrifying Turin (and the most cowardly mephit) with his frightful presence. The bard remains traumatised by this for the whole of the battle. Rosie hits the dragon with her eldritch blast, and Ug lands a couple of good blows before Old White Death knocks him down with his wings and flies off. On its next pass, Arauthator breathes on the PCs, and sends jagged pieces of ice down from the cavern ceiling to strike the adventurers. 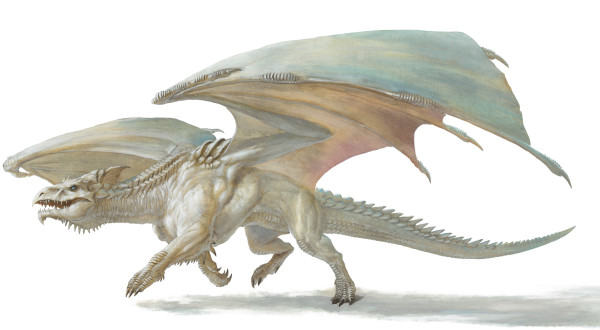 As the PCs look to Gwastdyn for healing, Arauthator raises a wall of ice between Ug and the others, then flies down to attack the paladin. Crake, up on an icy ridge, seizes his chance and shoots the dragon with an arrow of slaying, striking true. Ug smites the wyrm with his axe, inflicting serious damage, and the dragon flies into the mists.

Old White Death hasn’t given up, though. It casts a second fireball at the PCs, taking Turin down to 3 hp, then attacks Ug again, reducing him to zero hit points. This doesn’t stop the half-orc who fights on for another round, supported by Rosie. Ug’s powerful blows are enough and Arauthator flees, diving into an icy pool to escape. Turin rushes over and heals the dying paladin.

The PCs look into the pool that the dragon dived into and think they can see a tunnel leading into the sea. Gwastdyn wildshapes into a polar bear and swims down to confirm this. The PCs rest and recover, eating plenty of goodberries, then start plundering the treasure in the lair, chipping it out of the ice.

Maccath the Crimson gathers up the diabolical tomes in the Scriptorium to take back to the Hosttower of the Arcane in Luskan. The PCs find a number of spell scrolls here which they divide between them, and also take Marfulb’s writings on the natural history of the Sea of Moving Ice.

The Ice Hunters thank the PCs for driving off Old White Death and give them some of their best fermented fish in gratitude. They don’t hang about for a celebratory feast, though - instead, they get into their kayaks and paddle off as fast as they can.

The Frostskimmr sets sail for Luskan. Ug insists on throwing one of the evil-looking books overboard so Maccath gives him one of the less rare volumes to satisfy his eccentric religious principles.

Three white abishai devils swoop down onto the deck of the Frostskimmr and attack the PCs. They prove hard to kill but are no match for the adventurers. They deduce they must be after the infernal tomes on board.

The Frostskimmr arrives in Luskan, delivering Maccath the Crimson and the stolen books to the Hosttower of the Arcane. Perhaps the Arcane Brotherhood may help in the coming battles with the Cult of the Dragon?

The Frostskimmr arrives back in Waterdeep, in time for the Second Council.

Recent Posts from This Journal