Nearly 3,500 words written in the last seven days which I am really pleased with. This was helped by moving offices at work, meaning I only worked a half day yesterday, and was able to get a fair bit done in the afternoon.

I started off with Law and Order, defining the workings of the justice system, and coming up with typical punishments for various crimes. In keeping with Byzantium’s past, executions are by impalement, a slow and painful way to go, so best to avoid committing mass murder, necromancy, treason or demon summoning! I’ve also written more on the City Watch, including Sgt Saurish, a fun character who has played an important role in the two Parsantium campaigns.

The next section is a big one currently called Culture and Customs, and covers things like food and drink, clothing, festivals and entertainment. This is fun stuff to write, and adding details on what kind of food is available at the tavern or how the chariot races at the Hippodrome work really helps to immerse the players in the setting. I’m still working on this stuff but have finished first drafts on food and drink, clothing, superstitions and communication. As a little taster, here’s the entry on the “Evil Eye”

Many Parsantines have a fear of the “Evil Eye” which dates back to earliest days of Dhak Janjua and the basilisks that lived in the area where the city was founded. These terrible beasts preyed on the refugees as they built their new homes. Villagers would disappear, only for a statue of the missing person to be found nearby, often with a look of horror on its face, causing widespread fear and panic that some kind of terrible curse had befallen the fledgling settlement. Even after the basilisks had been tracked down and killed by a hunting party (including Vrishabha himself), stories of the Evil Eye persisted through the generations. It is common for Parsantines to wear an eye-shaped blue glass amulet touching their bare skin under their clothes to protect them from its influence. Sometimes these amulets have magical powers of protection but most are just mundane trinkets. Although magic is accepted as part of everyday life, those most scared of the Evil Eye may well freak out if they spot someone with blue eyes casting a spell in case it’s a curse. 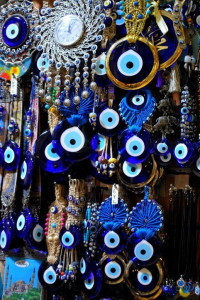 I’ve got festivals and entertainment to do next – this will include the famous Victory Games that take place every October on the anniversary of Corandias XVI the Stubborn's successful Great Crusade which liberated Parsantium from the tyrannical rule of the hobgoblin “king” Kalgroth Ironheart, as well as gambling, drugs and prostitution. If I get time, I’ll also cover off the trade routes in and out of the city, what goods go where and so on.

I’m also starting to think about the adventure Adam Page has asked me to run at the 4th UK D&D Tweet Up. It’s for 4th level characters, using the 4e rules, and I’m looking at something set in the Old Quarter and involving one or two criminal gangs. I’ve already found a couple of cool poster maps I want to use for two of the key encounters and there should be a fair bit of investigation, role-play and exploration too. Running something for people I don’t normally game with should be a lot of fun and will hopefully give me some useful feedback that will help make the final book even better.