Here’s what happened in last night’s game. No Ug this time, but Rosie returned. Each PC gets 1,650 xp.

Just before the party heads through the secret door, Rosie steps onto the dais to examine Diderius’ sarcophagus. The wizard’s booming voice warns her: “Leave me to my rest or face your doom!”. She decides to join the others at the entrance to the humid, slimy corridor heading towards the yuan-ti enclave.

Crake scouts ahead and spots a group of brown-skinned lizardfolk with strange green markings ahead. Battle is joined and the PCs are able to take them out easily with swords, clubs and hunger of Hadar. Beyond the entry chamber a set of stairs lead down to a slime-covered stone bridge over a dark pit. As Gwastdyn descends the steps, a sibilant voice calls from up ahead, telling him Rosie is really a yuan-ti agent and should be dealt with. The dwarf resists, and summons a pair of giant spiders on the bridge to attack the lizard folk and yuan-ti malisons on the other side. Rosie casts hunger of Hadar again to surround their enemies in alien darkness.

Then, Turin and Gwastdyn hatch a cunning plan to get safely across – Gwastdyn ties a rope around one of the giant spiders and Turin casts levitation. The spider walks across the bridge, pulling Turin along. Unfortunately, the bard succumbs to a suggestion from one of the yuan-ti to stop concentrating on his levitation spell and let go of the rope. He falls but luckily manages to catch hold of the edge of the bridge and stop himself plummeting to his doom. 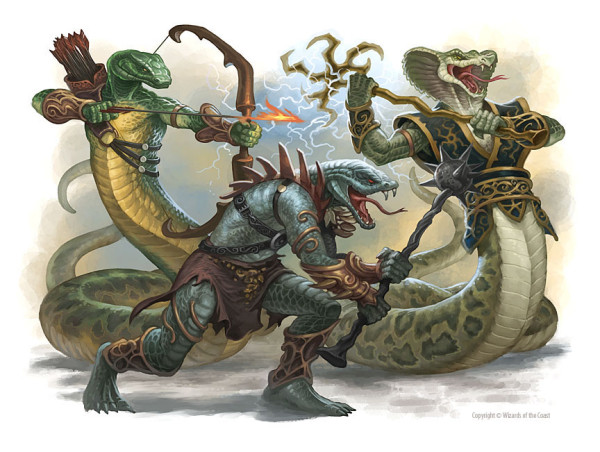 Next, Gwastdyn wild shapes into a giant owl and flies Crake and Rosie across while the yuan-ti and lizardfolk finish off the giant spiders. Turin hauls himself on to the bridge and crosses over to the far side where he finds himself surrounded as enemy reinforcements arrive. One of the yuan-ti suggests the elf runs back across the bridge – he fails a second Wisdom saving throw and ends up clinging on for dear life again. The same thing happens to Rosie who then spends several rounds trying (and failing) to climb up. Turin’s enhance ability and minor image* don’t seem to help her much. Crake fires arrows into the lizardfolk, thinning their ranks, and Gwastdyn summons two packs of wolves but it’s his reluctantly cast thornwhip cantrip that eventually finishes off their last opponent. 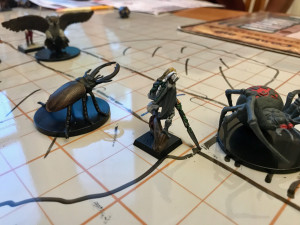 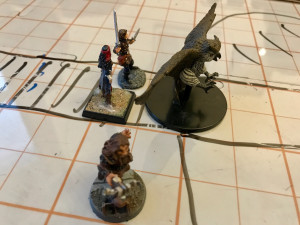 Low on hit points and spells, the PCs try to find somewhere to have a short rest. No one wants to go back over the perilous bridge so the only alternative is to press on. Gwastdyn sends the wolves into a side corridor, followed by an invisible Rosie. Up ahead, arrows fly up from a sunken chamber, killing two wolves.

Returning to the others, Rosie and the wolves climb the stairs to the diamond-shaped meditation chamber. Here, snakes pour out of holes in the walls, and fill two suits of armour, animating them as “snake horrors”. Rosie retreats and Gwastdyn casts wall of fire across the room, damaging the horrors. They move forward to attack Turin and take him down. Rosie saves him with spare the dying but he goes down again soon afterwards and she has to do it again. Turin is saved but is babbling incoherently. Gwastdyn changes to bear form and shoves one of the horrors back into the fiery wall, but they are hard to damage – Turin’s shatter and Rosie’s eldritch blast do nothing. Rosie even resorts to setting fire to Frulam Mondath's robes so she can cast control flame on them. Finally, Crake finishes off the last snake horror standing with his rapier.

Rosie casts Leomund’s tiny hut and the PCs climb inside for a much-needed short rest.


*of a sign pointing back towards the yuan-ti. Made by Faerun's equivalent of Acme, presumably.
Collapse