Here’s what happened in last night’s game, in which we finished Hoard of the Dragon Queen and began Rise of Tiamat. Each PC gets enough experience to reach 8th level.

After some careful deliberation over strategy, the PCs head inside the iceberg beneath Skyreach Castle to confront Glazhael the white dragon. Turin drinks a potion of cold resistance and Rosie casts fly on Ug.

Ug, Gwastdyn and Rosie enter the dragon’s lair at the lower level, while Turin and Crake approach from the upper tunnels. Only Crake is quiet enough to surprise the dragon and gets off an arrow with sneak attack, inflicting 43 hp damage. Then, Glazhael acts, surrounding Turin and Crake with freezing fog, and breathing on Ug, Gwastdyn and Rosie. Rosie loses concentration, meaning Ug is no longer flying and can’t get to the dragon who is clinging to the ceiling. He runs in anyway and challenges the dragon to face him in melee. Meanwhile, Turin, Rosie and Crake attack from range while Gwastdyn summons a pair of giant eagles. The eagles swoop into combat with Glazhael and inflict a couple of wounds on him before they are slain. 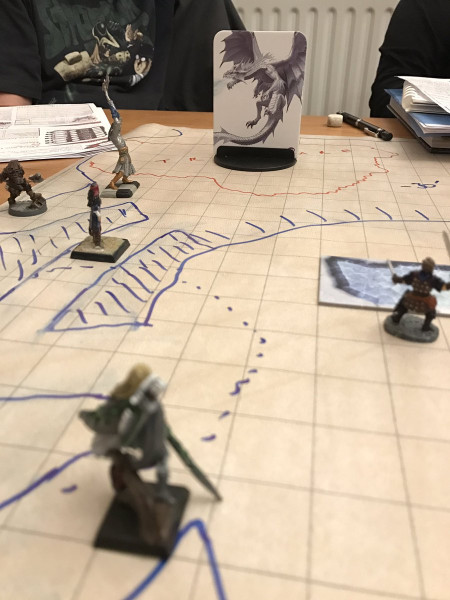 Glazhael conjures a wall of ice to block Gwastdyn and Rosie from entering the cavern, then flies over to the upper level to attack Crake and Turin. Ug climbs up and steps forward to attack in melee, but falls unconscious. The druid summons a second pair of giant eagles to harass Glazhael but by this time the dragon is able to breath again and Rosie and Crake both go down inside another cloud of freezing fog. Turin and Gwastdyn bring them round so they can escape the fog, and Rosie saves Ug with spare the dying. By this time, Glazhael is badly wounded too and flees towards the exit after Rosie hits him with blight. A third pair of eagles are summoned to give chase and manage to bring the dragon down to just 8 hp before it flies off.

Exhausted, the PCs have a short rest to heal up, then chisel away at the treasure hoard, taking a number of magic items, and all the gems and jewellery they can find, before casting create water and hunger of Hadar to freeze the hoard again and disguise their activities. Then, they head upstairs and tell Blagothkus they have driven off the dragon. The cloud giant agrees to take them to Waterdeep and says they can take “a few items” from the loot. The PCs thank him and return to the cave to take the chest they filled with gold coins earlier!


HOARD OF THE DRAGON QUEEN ENDS. RISE OF TIAMAT BEGINS.

Skyreach Castle arrives near Waterdeep. The PCs fly down to the Trade Way on wyverns from the castle, and enter the city on foot. As they approach, they are greeted by a talking raven bearing a message from Leosin Erlanthar – the party are to meet him outside the Lord’s Palace. Inside the city, the PCs experience a strange sense of unease as the Draakhorn sounds, first once, then again.

Outside the Lord’s Palace, Leosin briefs the party. Following the assassination of the Masked Lord Arthagast Ulbrinter, the factions and leaders of the Sword Coast have come together to oppose the Cult of the Dragon and the PCs must report to the Council of Waterdeep.

The adventurers are welcomed to the first Council of Waterdeep. The other attendees are: 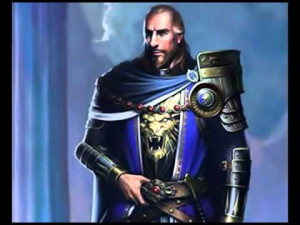 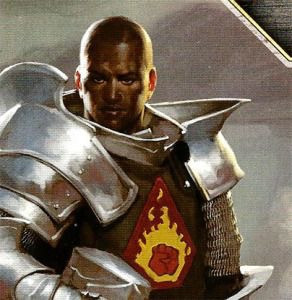 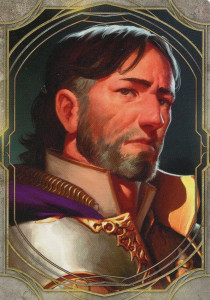 The PCs give their report, recounting their battle against the Cult of the Dragon from Greenest to Skyreach Castle. Crake mentions that they have the black dragon mask and it is suggested the party keep hold of it for the time being. Overall they make a good impression on the Council, particularly Sir Isteval, Ontharr Frume, King Melandrach, Ulder Ravengard and Taern Hornblade, but the failure to capture the flying castle irks Connerad Brawnanvil.

Lord Neverember and the council deputize the PCs with emergency investigative powers, and they are asked to undertake two missions. Leosin briefs the party no the first – to travel to Boareskyr Bridge to investigate rumours that Varram the White has lost the white dragon mask. A Waterdhavian noblewoman named Dala Silmerhelve tells them about the second mission – to travel to the Sea of Moving Ice, the last known location of the Draakhorn, and find Maccath the Crimson, a missing tiefling sorcerer who is an expert on all things draconic.
Collapse