Here’s what happened in last night’s game in which the PCs finally took down Wyrmspeaker Rezmir. Each PC gets 2,060 xp.

The PCs enter the village of Parnast - everyone except Ug is wearing Cult of the Dragon masks and cloaks and Rosie has cast disguise self to appear as a bloke called Arric. Turin notes that the stables look too large for horses. After greeting the cultists in the village square in the usual manner (“Praise Tiamat’s glory!”), the party enters the Shrine of Axes and has a look at the four statues inside before heading to the Golden Tankard. The landlord tells them that Captain Othelstan is in charge of the cultists in the village and gives the party directions to the captain’s house.

Arric’s story isn’t very convincing so a fight breaks out with Othelstan and his men, but Turin’s fear spell sends half of them running scared which buys the PCs some time to deal with the others. Gwastdyn wild shapes into a bear and Rosie/Arric takes down the captain with her agonizing blast. While Crake, Rosie and Gwastdyn search the house and grab some interesting-looking papers, Turin and Ug hurry to Skyreach Castle which is preparing for departure. They display the banner they got from Talis’ hunting lodge and give the pass phrase (“Tiamat, our Mother and Strength!”), entering the castle via the drawbridge. Inside, they are met by two ogres, Tarzzen and Hunnc, who are confused by Turin’s florid turn of phrase, but take a liking to Ug who is more on their level. They offer to take the two PCs to see Blagothkus the cloud giant owner of the castle, and lead the pair across the lower courtyard to a set of spiral stairs.

Meanwhile, the others have realised the castle is about to go and hurry over the drawbridge, remembering to give the pass phrase. They spot Turin and Ug with the ogres and catch up with them. A heated discussion takes place about whether to go and see Blagothkus or to report to the cult barracks – Ug insists on going to see the cloud giant and no one is keen on him talking to the giant on his own. The ogres take the PCs through the upper courtyard, past two tall towers to Blagothkus’ tower and upstairs to the giant’s chamber.

Unfortunately the PCs haven’t really come up with a plan or got their stories straight. Turin removes all of his cult gear and says he isn’t a member of the Cult of the Dragon, Ug says he is the party’s “protector”, and the others claim to be cultists here to report to Rezmir. Blagothkus is so frustrated with their conflicting stories he swings at Rosie with his morningstar. A fight looks likely to break out but Crake is able to avert disaster by coming clean just in time, explaining the PCs are actually here in disguise to kill Rezmir. Blagothkus explains he is no friend to the cult who are plotting to take over the Sword Coast, and hopes that the threat of a new dragon empire will get the giants riled up enough to go to war. If the PCs want to take down Rezmir and the dragon, that’s fine with him. He tells them to return to the lower courtyard where they will find the cult barracks and Rezmir.

The PCs visit the barracks and have a short rest, then Turin casts invisibility on Crake. The rogue heads off into the courtyard with Gwastdyn the white rat in his pocket. Together the pair check out the kobold kitchen, the stone giants’ quarters, a storeroom and guest quarters. There are two doors that are locked that Gwastdyn can’t squeeze underneath. Next, they head down the spiral stairs until they reach the dragon’s lair in an ice cave beneath the castle. Glazhael the Cloudchaser, a huge white dragon, clings to the ceiling above a vast pile of frozen loot. Crake backs away as quietly as he can and returns to the others. 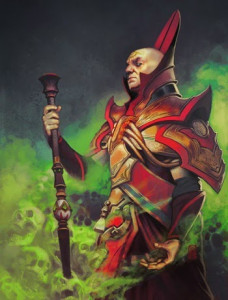 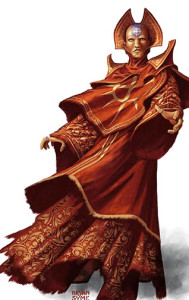 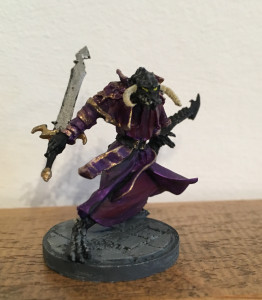 The party head across the courtyard and open the far set of doors. Inside are two Red Wizards – Azbara Jos and Rath Modar – and their pet gargoyle. Jos recognizes the adventurers from the caravan and the wizards attack with fireballs. The PCs get into melee with the mages, taking down Rath Modar who melts into an icy puddle – apparently a simulacrum rather than the real wizard. Jos gets off another fireball before he too is killed but by this stage Rosie is unconscious. Then, Rezmir arrives with her two guard drakes and takes down Gwastdyn with her nasty wounding greatsword. As the drakes attack Turin, Ug uses misty step to get behind Rezmir. Rosie casts blight as she lies bleeding on the floor, then Crake strikes the half-dragon with a sneak attack, allowing Ug to deliver the killing blow with a loud “Feel my slash!” The PCs finish off the gargoyle and the drakes, and bring the druid round. They search the wizards’ room finding correspondence to Modar from Severin the Red, and a sinister volume entitled Beyond the Iron Gates. They have a short rest and decide what to do next.
Collapse