Here’s what happened in last night’s session of Hoard of the Dragon Queen in which the PCs fled in fear of their lives from a roomful of centipedes and encouraged the Scaly Death lizardfolk to rise up against their bullywug oppressors. Each PC gets 1,240 xp.

Thousands of nasty, biting centipedes pour into the chamber, surrounding the adventurers. There are just too many for the PCs to cope with, and the PCs are forced to retreat when Turin falls unconscious. Ug drags the elf bard to safety and the others follow; Gwastdyn is last out and wild shapes into a bear to escape intact. The party return to Pharblex’s sanctum for a short rest to allow Turin to recover from the paralytic poison in his system.

Returning to the misty chamber, the PCs follow the passage leading out to the west. Through the mist, Turin can just make out a series of runes carved into the stone floor. This is a teleportation circle – presumably the cult are using it to ship the treasure onwards. It needs a command word or portal key to get it to function. The PCs return to their quarters upstairs to sleep.

The party’s long rest is interrupted by shouts calling the cultists to breakfast and the start of the working day. Crake fakes illness and Rosie turns on the charm with Sivash to get out of the morning shift, while Ug just refuses to do any work and is locked up in the storeroom by the cultists as punishment. Turin feels fully rested after his trance, but Gwastdyn still needs sleep and can’t think of a clever excuse to avoid working. Both start lugging crates down into the dungeon with the other cultists.

Later that morning, Turin skives off to confer with Crake and Rosie while Gwastdyn continues shifting crates. The dwarf druid watches a group of bullywugs go past into the caverns. Worried they’re on their way to see Spattergoo, he warns the others. Turin casts invisibility on Crake who sneaks off to find and rescue Ug.

Meanwhile, Rosie, also invisible, goes outside the castle to the lizardfolk huts and finds Snapjaw. She reveals her presence and tells the lizardfolk "the Age of the Frog is over, and the Time of the Lizardfolk is here!”. Snapjaw and his fellow Scaly Death tribefolk are convinced. They follow Rosie back into the castle where a meeting with their comrades inside follows. The lizardfolk agree to rise up to overthrow the bullywugs – they march out and attack the frog-folk in the barbican and in their quarters, slaughtering them.

With sounds of fighting all around, the PCs join up and head towards the keep. At that point Dralmorrer Borngray appears from the tower with six dragonwing cultists. Ug and Turin charge in to attack the one-eyed elf, while Rosie, Crake and Gwastdyn battle the dragonwings. The druid conjures a pack of wolves which make nuisances of themselves, snapping at the cultists and pulling them down, then he turns into a bear. Rosie kills Borngray with her agonizing blast after Ug and Turin’s attacks have seriously wounded the cult leader. The party soon finish off the rest of the cultists. 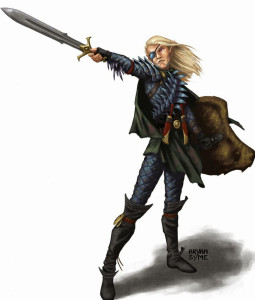 After entering the bullywug barracks and finding only dead frog-folk and lizardmen, they return to the keep. Crake picks up Borngray’s sword, a +1 swashbuckler’s rapier. The PCs go inside the keep, exploring the first and second floors, both unoccupied apart from a squawking raven in a cage. It looks like whoever was living in the first (ground) floor rooms has left in a hurry; the second floor rooms belong to Borngray. Ug heads up to the observatory on the third floor. As he steps into the chamber, four gargoyles swoop in through hatches in the roof. The others rush up to help and the evil stony creatures are defeated.

Looking through the telescope-like contraption in the tower, Rosie observes a pair of large black dragons in their swampy lair, surrounded by their lizardfolk guards and servants. It appears that Voaraghamanthar isn’t the only black dragon in the Mere of Dead Men.

Down in the courtyard, it looks as if the Scaly Death have emerged battered but victorious. The bullywugs are dead or have fled into the mere. The Time of the Lizardfolk is here.
Collapse