Here’s what happened in last night’s game. Each PC gets 4,500 xp. You’ve not had an extended rest so please note dailies and surges used.

Late in the evening, the PCs leave Brandil Hollowreed in their apartment and head off to the Poor Ward. Jenma and Hrothgar chat to a couple of friendly half-orcs in the Butcher’s Hook on Sultan Street and find out that a couple of dodgy characters are still watching Brandil’s place from across the street. One of them asks for Juma’s autograph; he signs it “to Shitface” but luckily the half-orc is illiterate and doesn’t realise.

The Juma Associates split up and advance on the alley opposite Brandil’s apartment building, sending Gil ahead as a decoy. The two lurking thuggee leap out and start strangling the eladrin, but the other PCs quickly arrive on the scene and make short work of them – Gil kills the first and Jenma the second. Heading inside, Ulthar sensibly stays downstairs to keep an eye on the entrance while the other go up to the flat. Hrothgar kicks the door in and is attacked by the thuggee lurking behind it who sunders him from sight. Meanwhile a second thuggee appears from a room on the other side of the hall and attacks Gil, also causing him to disappear. Ulthar sprints upstairs to join in; there’s another swift, bloody fight, ending in the death of both thuggee. The PCs retrieve Brandil’s mother’s ashes from the mantelpiece and return to their apartment.

Reunited with his dear old mum, the halfling draws the PCs a crude diagram of the sewers and Hidden Quarter tunnels leading to the secret temple of the cult, warning the PCs that it is filled with snake people. Hrothgar has heard tales of the kundali of Sampur, shapeshifting serpentfolk who live in the jungles and worship dark gods. Perhaps this is what they are about to go up against? After he’s finished the map, Hrothgar throws Brandil out of the apartment, advising him to hurry up and leave the city while it’s still dark.

At midnight, the Juma Associates enter the sewers via a manhole in the Street of Many Gods in the Temple Ward. After a short distance, a secret door leads to a worn stone staircase heading steeply down into the Hidden Quarter; as the PCs pick their way slowly downwards, they notice the unsettling snake motifs carved into the walls.

Then, the stairs enter a large chamber guarded by serpentfolk warriors and snake-blooded “tainted ones”, led by a kundali chanter. The tainted ones open fire on Juma and Hrothgar with arrows that turn into snakes in mid-air. Hrothgar charges in, followed by Juma and Ulthar; Jenma and Gil remain on the stairs and cast spells. Gil uses his fiery transformation, then creates a fiery constrictor to ensnare and burn the chanter and the two archers, while the other PCs fight the two stalkers and the large abomination. Ulthar’s warmaster’s assault gives everyone an attack, leading to the death of the first stalker. When the warriors and tainted ones are killed, the priestess flees down the stairs, pursued by Hrothgar and Jenma. The dragonborn casts acid claw, killing her. 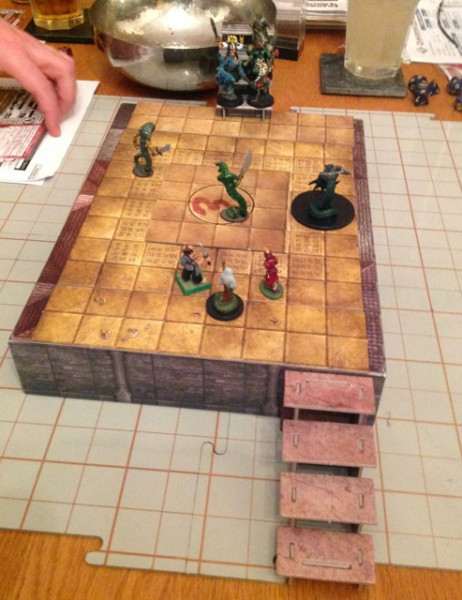 After looting the bodies, the PCs head down the staircase and into a sinuous, twisting tunnel which ends at a pair of doors. Using the key found on the priestess’ body, Hrothgar opens the door. Beyond is a chamber with three doors and a statue of Kali in the centre, guarded by three tainted ones. As the PCs move in to fight, snakes pour out of the holes in the mosaic on the northern wall and swarm to attack. The PCs deal with these new foes quickly, with Jenma’s burning spray finishing off the snakes.

Deciding they need to find out more about what’s going on here, Juma returns to the landing and retrieves the priestess’ body so Gil can cast speak with dead. Unfortunately, the eladrin’s diplomatic skills aren’t up to much and the kundali refuses to answer his two questions, leaving the PCs with no alternative but to pick one of the doors at random and press on.

The door leads to a hallway with five exits. Hrothgar takes the one opposite, opening a door to what appear to be living quarters for the serpentfolk. There is no one here, allowing the PCs to loot the room undisturbed. As well as gold coins and an ornate longbow, they find two vials of strange oil, one pink and one green.

It's been a long wait but my book, Parsantium: City at the Crossroads is now on sale in PDF & print at drivethrurpg.com, paizo.com, amazon.co.uk and amazon.com.

I'm very happy with how it's turned out :) 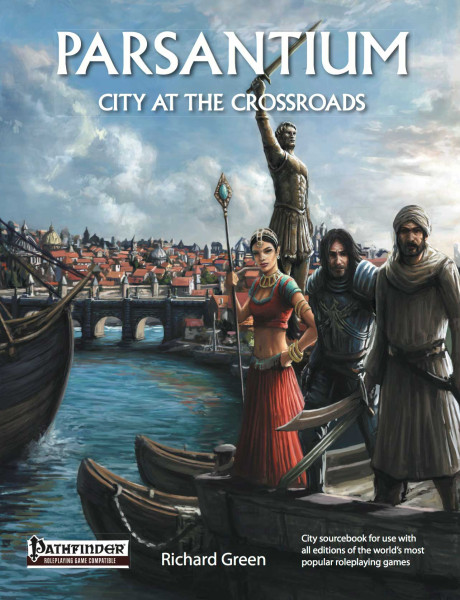