Here’s what happened in last night’s game in which we said goodbye to Sora, and hello to Jenma. Each PC gets enough xp to take them to 15th level.

The Juma Gang attend Sora and Bax’s wedding at the Celestial Bastion, Bahamut’s temple in the Grand Ward. As the ceremony begins, a female dragonborn arrives, somewhat out of breath, and takes her seat with Sora’s family. This causes quite a stir – it transpires this is Sora’s missing sister, Jenma. Ruthva, the high priestess, attempts to restart the wedding but is interrupted again as a portal opens from the Elemental Chaos, spilling forth fire and iron archons led by a salamander noble.

Hrothgar charges the salamander, getting grabbed by the creature’s tail, but quickly breaks free. Gil casts ice storm which is very effective in keeping the archons confined to the area around the portal. Jenma and Sora both use their dragon breath on the elementals as Bax fights at his fiancé’s side. Ulthar charges into melee, followed by Juma who summons his sword into his hand from the weapons rack by the temple entrance.

Hrothgar rages, killing the salamander, then Gil teleports into the middle of the icy zone and casts fire shroud. Unfortunately this proves ineffective on the fire archons, but he follows up with his sword, striking the iron archon crescent blade. The battle is turning against the archons, and two of them flee through the portal. After finishing off the last of the elemental creatures, Hrothgar sticks his head through the portal, but can’t see anything. Deciding not to go further in, he pulls back. Gil is able to confirm that it leads to the Elemental Chaos just before it vanishes. 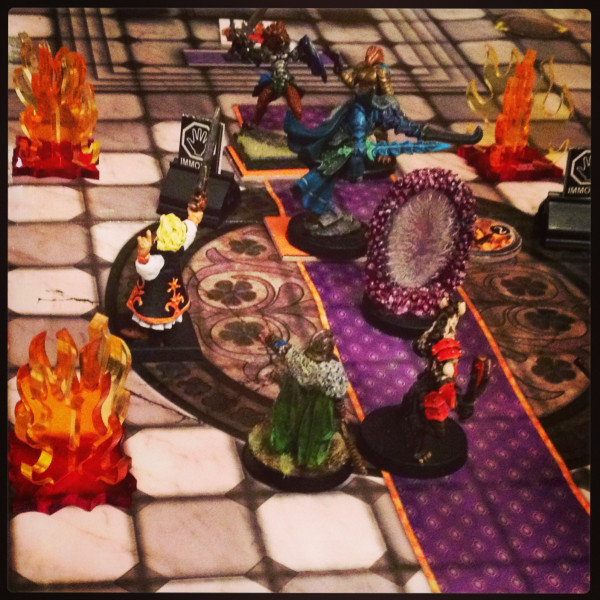 Wounds are healed and the guests who have fainted are revived, allowing the wedding to resume for the third time. All goes well and the married couple and their friends and family enjoy a great feast in the chapter house, followed by memorable speeches from Ulthar and Hrothgar (who toasts the couple in the traditional gnoll fashion, biting the head off a live meerkat and drinking its blood).

The PCs talk to Jenma, trying to find out more about her, but she doesn’t reveal much. Sora tells Gil that she feels its time for her to go her own way and leave the Juma Gang behind, citing ideological differences.

The Juma Gang attend the Victory Games as guests of Perenon Therund; Jenma comes along, taking Sora’s seat in the box. Bets are placed on the teams of gladiators taking part, but only Gil successfully picks the Luminous Heroes of the Ironcrags to win the prized Winged Helm. After the gladiatorial contests are over, the PCs are approached by Plutinus, Editor of the Games, who explains that the Greens chariot team have gone down with food poisoning, caused by dodgy oysters, and the Old Quarter Tribune, Murad al-Rumi, has suggested the Juma Gang could be the ideal candidates to take their place.

The party agree and head to the Greens faction HQ where they are given a briefing by Maruthus, the team manager on how to race chariots. Juma bets 1,000 gp on himself to win at 10-1, and also Mercurius, the Blues’ star racer (evens).

Race day! Jenma takes an early lead, her intimidating presence and creative threats causes the rival drivers to back off and give her space. Hrothgar is hot on her heels, flinging his chariot into Mercurius’ to throw the Blues’ driver off course. All three drivers for the Reds are knocked out in the first lap after crashing into each other, and two of the Blues’ drivers and one of the Whites’ smash into the walls of the Hippodrome soon after. Juma is determined he is going to win his bet, and tries to run Hrothgar off the track; Gil responds by grabbing Juma’s reins with mage hand and the genasi loses control temporarily and slips behind. As the PCs race round on the third lap, Hrothgar notices something strange is happening to the big obelisk in the middle of the spina – its hieroglyphics are glowing red.

Suddenly, the obelisk explodes, showering the track with debris which the PCs and the other charioteers must swerve to avoid. A giant figure resembling the Khemeti god of the dead, Anubis, steps from the rubble and strides towards the box holding the Old Quarter Tribune and Captain Saurish of the City Watch. The PCs ram their chariots into the great monster as it advances on the dignitaries. The Anubis giant turns and blasts Hrothgar and Juma with hot sand, blinding the gnoll. As the Juma Gang climb (or crawl) out of their wrecked chariots, they come under attack from the Tiangaon gladiator team, Tiger Claw, who are in the stands. 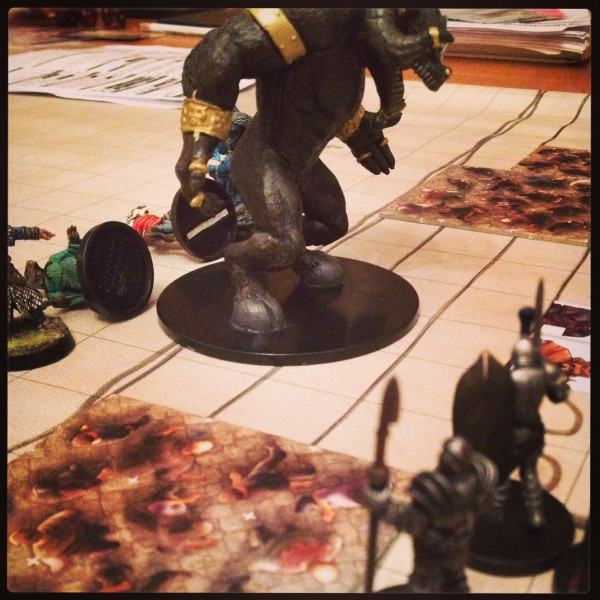 The sorcerer Lee Jian opens a “doom portal” beneath Gil’s feet, and the archer Chen Tung fire arrows from his great bow at the eladrin. Navrang Swiftstrike leaps down and charges Ulthar, and Lokesh Flashfoot attacks the blind Hrothgar and Juma. Jenma flies into the stands and blasts the Anubis giant with acid, killing it, as it slashes at Ulthar with its mighty khopesh. Ulthar then takes Navrang’s head clean off with a devastating critical and gets Hrothgar to “shake off” his blindness. The gnoll turns his attentions to Lokesh, knocking him prone. As the gladiator stands up, Gil teleports next to Lokesh and attacks with his sword, revealing him to be an illusion. Meanwhile, Lee Jian has created another “doom portal”, briefly sucking Juma into another dimension.

Hrothgar climbs into the stand and charges the sorcerer, as Jenma advances on Chen Tung. Both men look confused momentarily and then call on the PCs to stop attacking – it seems as if they have been charmed in some way. Jenma slaps the archer in the face to snap him out of whatever domination effect he’s under as Hrothgar uses his fists to do the same thing, punching Lee Jian on the nose several times until he gets the message. The PCs have a few minutes to question the two men before the City Watch drag them away. Apparently they were attacked from behind while walking back to their barracks. The last thing they remember was coming round, tied to a table, while a huge shaggy minotaur stood over them chanting strange words (maybe Abyssal?) before everything went black.

It’s been felt less like a holiday and a bit too much like work, but we’ve used our second week off well, and Kate has finished the first edit of Parsantium: City at the Crossroads,  and I’ve finished my revisions to that edit.  This is great news as it means we can start laying out the book next weekend, prior to the second (hopefully much quicker) second edit and subsequent proofreading. Nearly all the interior art is in too which is excellent.

My Parsantium D&D campaign restarted again last night after a short hiatus. If you were wondering about the kind of adventures PCs can get up to in the city, you can read a write up of the game here. As this session featured a chariot race at the Hippodrome, I thought I'd post Matt Morrow's superb finished illustration.